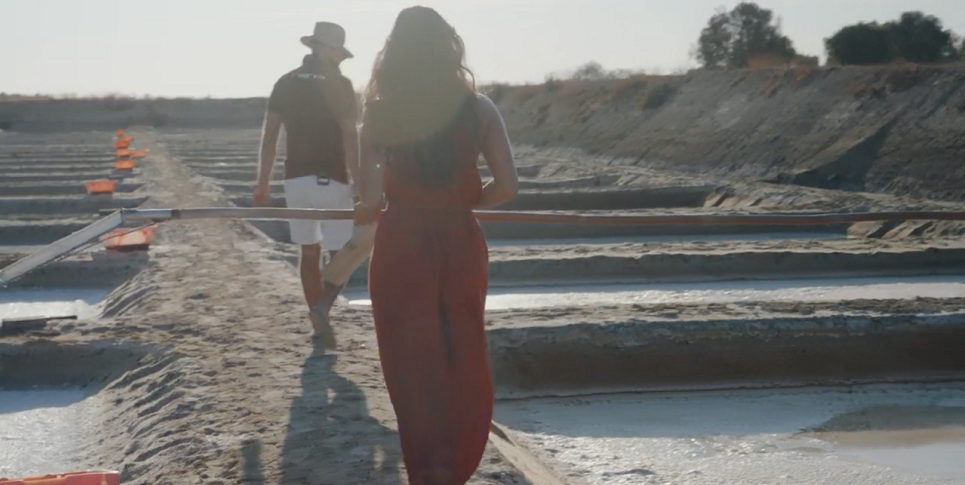 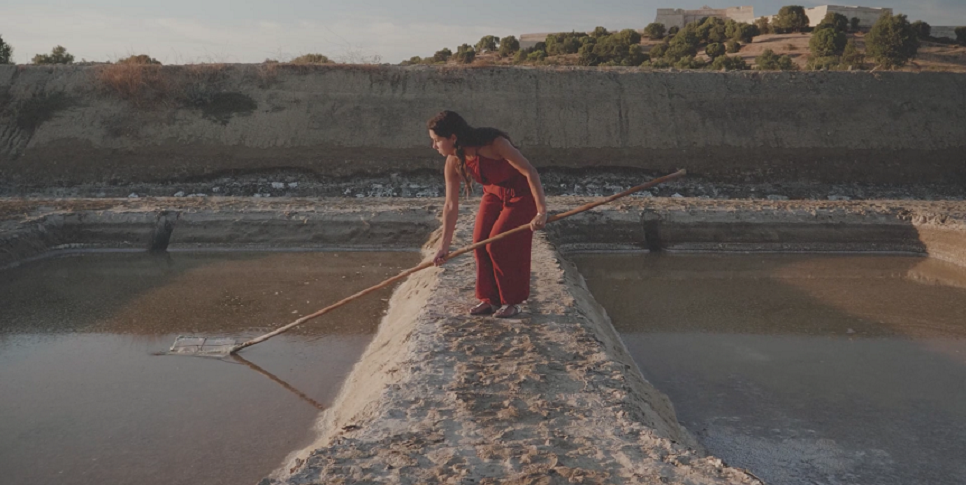 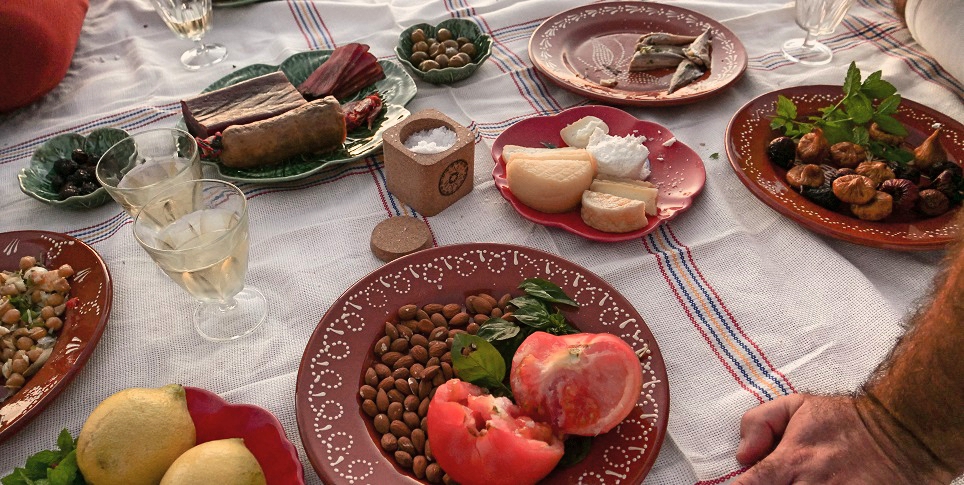 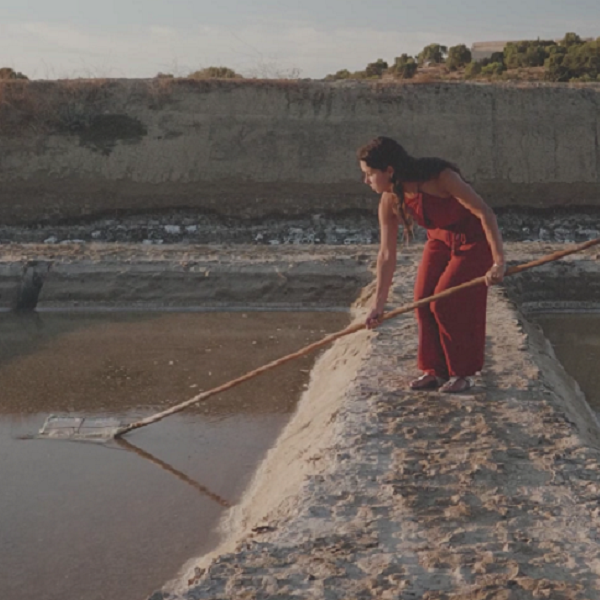 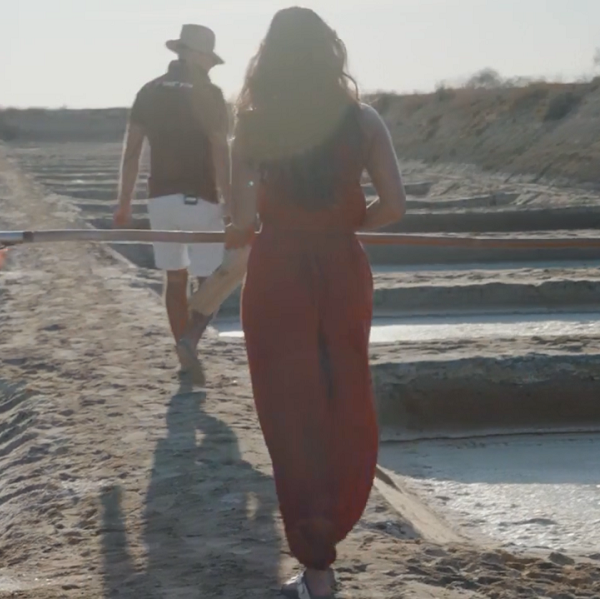 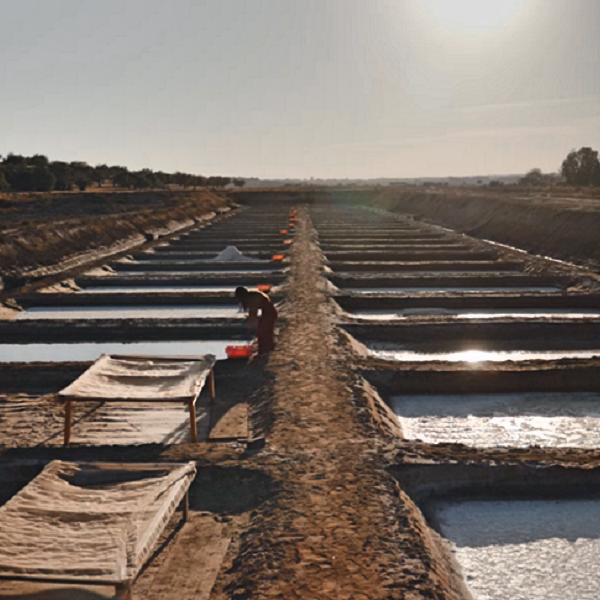 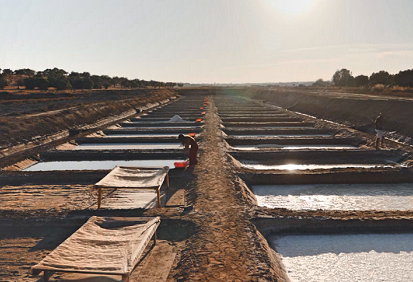 We awoke at dawn in the lovely coastal city of Tavira, just in time to enjoy “um pingado”: an espresso with a drop of milk, that had since became our morning classic. Our smooth awakening with a view of the Gilao river did not last long since we had to leave soon after. We drove half an hour to reach the salt harvesting ponds where we would reap fleur de sel for the first time of our young lives. The road was gorgeous and the sky was tinged with beautiful tones of orange. We arrived at the Castro Marim village, located at the end of a small windy road. As its Portuguese name suggests, this city is bordered by a medieval castle, giving it a rustic look.

Even though Castro Marim only had of few streets, we still got lost. One phone call later and we managed to find Jorge Raiado, the proud owner of the local business Sal Marim that supplies world-known chefs across the globe with fleur de sel and sea salt. With a big smile on his face, he welcomed us to this magical landscape while surrounded by tanks filled with natural samphire.

He took us through his installation located in a unique spot that offers a sumptuous viewpoint on the Guadiana, a river separating Portugal from Spain. The ponds are dug directly into the floor and they are located only 7 km away from the mouth of the river, that starts in the Atlantic ocean. They aim at collecting the salted water during high tides.

It was time to get started. While the sun was rising, I was getting ready to harvest. Jorge and I took our shoes off. I grabbed a strainer-like tool with a long handle and followed him into one of the ponds, where a layer of salt immediately immobilized my feet. I was surprised by this feeling, something midway between a mud bath and a foot scrub, but I kept on walking through the salt crystals while Jorge was teaching me the art of harvesting sea salt.

Then, in another pond filled with more water, I got to put my newfound skills into practice. Harvesting salt requires both strength and gentleness, and it consists of gently brushing the surface of the water with a small strainer to harvest the minerals that have flourished. In less than a minute, I had gathered salt crystals shaped like perfect pyramids. It is the most perfect fleur de sel I got to witness to this day.

Jorge explained the process in more detail to me: the ocean water carrying sea salt fills the ponds during high tide, and then recedes, leaving the white gold behind. During the following days, water evaporates thanks to the sun, a temperature that hovers around 30 degrees celsius, and the climate being deprived of rain from June to September. This evaporation makes it possible to harvest the fleur de sel that then solidifies into a thin layer of crystals on the surface of water, creating incredible shapes. The fleur de sel can be harvested several times, before allowing the pond to dry to gain access to the sea salt at the bottom.

This explanation was very interesting, but what better way to get to know a product than sampling it? Jorge had anticipated this so he got a basket filled with provisions out of his shack. He created the perfect picnic in no time in one of the dried-out ponds, where we sampled the freshly harvested fleur de sel on local vegetables, cheeses, and meats.

When it comes to make making the local fleur de sel known, Jorge is the man for the job. He has been developing techniques to harvest all shapes of the fleur de sel for 40 years, in the most natural ways possible. His products are extracted in the most natural manner possible; they are not transformed, processed, nor do they undergo any chemical treatments. As a result, the salt sold by Jorge on the international market contains way more nutrients than the salt found in most supermarkets. According to Jorge, not only is salt healthy, but it is also essential: “every human needs to consume 5 grams of salt per day. That’s why producing quality salt is important.” This ingredient is appreciated for its nutritional properties due to the fact that it is not processed, and for its pretty shape, making it the perfect meal garnishment. As a matter of fact, Jorge’s fleur de sel is the only salt garnish placed on each meal at the Ferreira Café.

You can also go visit Jorge’s installation if you want to learn more about salt and its properties, or if you want to try harvesting some yourself. You just need to make a reservation in advance to enjoy a well-orchestrated guided tour and tasting, with the man himself.

To reproduce this picnic at home without any fuss, here is the list of ingredients that were on our blanket!